I need to start off this week by apologizing for the lack of content last week.

John Lennon once said: "Life if what happens when you are making other plans." At least I think John Lennon said that ... I can't back that up. Anyway, I never understood what that meant until I had kids.

Another version I've heard recently is this: "Wanna make God laugh? Tell him your plans."

I had planned on putting a post up, but then I spent my nights working hard on other things and getting very little sleep, which meant I was taking naps in my car during lunch all week.

But hey, I'm not here to make excuses, I'm here to update you on things and show you some art.

So here's the update. Priorities is done. It's complete. It's in the proverbial can and stuff. At this point we are just waiting on some contracts then we can submit it to the people putting the anthology together. Once that is ready for you, Righteous Reader (You like that? Alliteration makes me smile), we will let you know right here.

Now that the updates are out of the way, let's talk about Big Ben.

Big Ben, if you weren't aware, is like this really big clock tower in London ... that's in England.

As I was putting together the script for Priorities, I came to what Harold and I will forever refer to as the infamous page six. On page six, I wanted to show that Captain Might spends his days working hard for the money as Oliver Jordan, while fighting the good fight as Captain Might during his spare moments. At some point I needed Cap to suddenly become aware of what time it was.

I wasn't sure at first how to go about this. I gave thought to Cap looking down at his watch at some point, until I realized that he doesn't wear a watch. I thought that maybe he could lift his sleeve to reveal a watch underneath, but that really felt like a bad idea.

So I struck upon the idea of using a clock tower. I figured that Garrison City, Cap's town, would have a clock tower. Then I thought, why not Big Ben? It shows that Captain Might is an international player.

So I put it in the script and send it on to Harold.

The reply I got back was full of rude comments regarding my ancestry. I couldn't understand why. That's when Harold and I had the following fictionally, dude-filled, completely made up but still true at its core conversation:

HAROLD: Big Ben? Seriously!? Dude, are you trying to kill me?

STEEVEN: Dude, I have no idea what you're talking about?

HAROLD: Do you realize how complex Big Ben is?

STEEVEN: What? Dude, it's like a rectangle with a circle. How hard can that be?

Harold's reply omitted due to the fact that it really wasn't anything more than the primal screams of an angry rhino.

You get the point.

In the end, Harold put his cowboy hat on and drew a wonderful looking Big Ben.

Then I had to lay down some flat colors on it.

I looked at the line art for a bit ... I studied it. Then I looked at an image of the actual clock tower in question. I freaked. I mean, do any of you understand just how complex Big Ben is? There's all kinds of stuff going on with that thing. I didn't know where to begin.

Luckily I was just flatting it so I threw down a few colors and let Harold deal with the rest.

He's still not speaking to me.

Anyway, here's how it turned out: 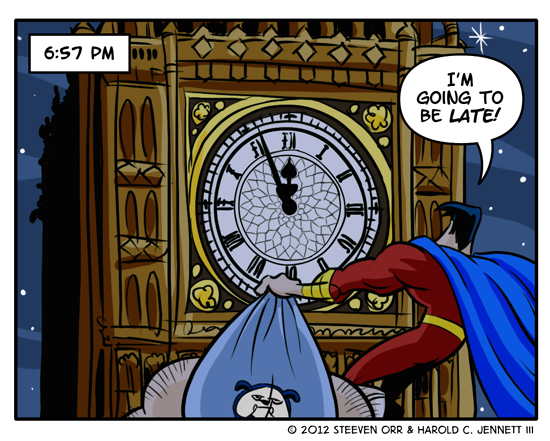 That's why Harold is the man.