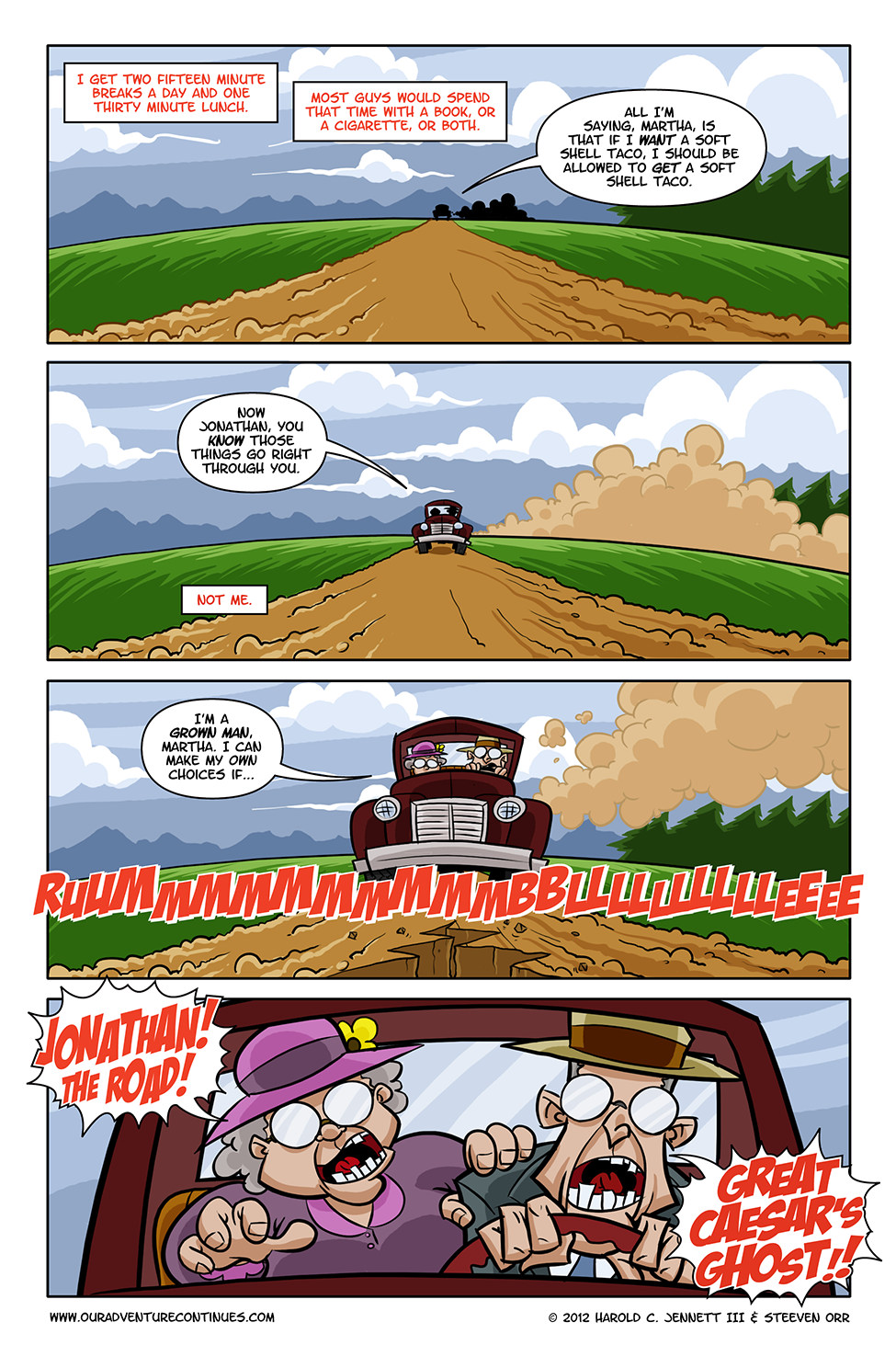 Here we are with page four.

We're just half way through our first story and I've already run out of things to say.

This is a page I had written years ago as part of an intro for a different Captain Might story. I've since re-written the intro and this page didn't quite fit anymore.

It's such a small thing, but I felt I'd never be able to use it, and it made me a little sad ... then Priorities came along and I found a way to get it in there with a little adjustment.

So, since the original will never see the light of day as a comic story, I'll post the script from those two first pages.

Oh, and don't worry, this will not at all spoil what's coming up next week ... not in the least. Like I said, I made changes.

The story starts off in space. We see a planet in the distance. The planet is not Earth.

NARRATION BOX: A LONG, LONG TIME AGO. IN A GALAXY FAR AWAY.

Maybe a little closer to the planet.

NARRATION BOX: A PLANET WAS DYING.

NARRATION BOX: ONLY ONE KNOW OF THIS PLANET’S IMPENDING DOOM.

NARRATION BOX: A YOUNG AND BRILLIANT SCIENTIST, WHOSE EVERY WORD OF WARNING WENT UNHEEDED, KNEW THAT IT WAS UP TO HIM TO SAVE THAT WHICH HE HELD MOST DEAR.

A little bit closer to the planet. A rocket is streaking it way away from the planet, which is now exploding.

NARRATION BOX: PLACING THE PRECIOUS CARGO INTO THE CLOSE CONFINES OF A SMALL ROCKET, THE SCIENTIST SHOT IT OFF INTO SPACE.

Earth with the rocket heading towards it.

NARRATION BOX: THE ROCKET’S DESTINATION WAS BLUE AND GREEN PLANET IN THE MILKY WAY GALAXY.

NARRATION BOX: A PLANET REGARDED BY MANY IN THE UNIVERSE TO BE VERY TINY AND NOT REALLY WORTH THE BOTHER.

We are now on Earth and see a shot from above of an old 50’s style pick-up truck motoring its way through a flat countryside. Maybe we see it from the rocket’s point of view so we can see that the rocket is heading for the truck.

We are now closer to the truck. Close enough to see a middle aged couple in the cab. The man (Jonathan) is wearing glasses and a button-up flannel shirt, and has a conservative hair style. The woman (Martha) is wearing glasses, has her hair tied up in a bun, and is wearing a floral-print dress. The two seem to be arguing with each other in a good-natured sort of way.

MARTHA: NOW JONATHAN, YOU KNOW THOSE THINGS GO RIGHT THROUGH YOU.

Close up of Jonathan’s face, we can see the rocket from Page One reflected in his glasses. His face is contorted with fear and he his pointing and screaming.

Suddenly, there is Captain Might, floating a few feet off the ground between the truck and the rocket. Captain Might has caught the rocket in one hand. We now see that the rocket is really no bigger than a foot long submarine sandwich.

CAPTAIN MIGHT: FEAR NOT, MIDDLE-AGED COUPLE, NO HARM SHALL BEFALL YOU. NOT WHILE I’M ON THE JOB.

Captain Might flies away with the rocket, leaving Jonathan and Martha standing alone, and in awe.

JONATHAN AND MARTHA TOGETHER: THANK YOU, CAPTAIN MIGHT! YOU’RE OUR HERO!


So there you go. What's funny is that I've yet to come up with just what's in that rocket.

Before I go, just a couple of updates.

Update the Second: We are now 23 strips into the as yet to be named (if it ever is) strip which will follow Our Adventure Continues. We have some fun stuff planned with that strip, so stick around for all of that.

So, in the end, it turns out that I had much more to say than I thought.

See you next week.
Posted by Steeven R. Orr at Wednesday, December 19, 2012
Email ThisBlogThis!Share to TwitterShare to FacebookShare to Pinterest